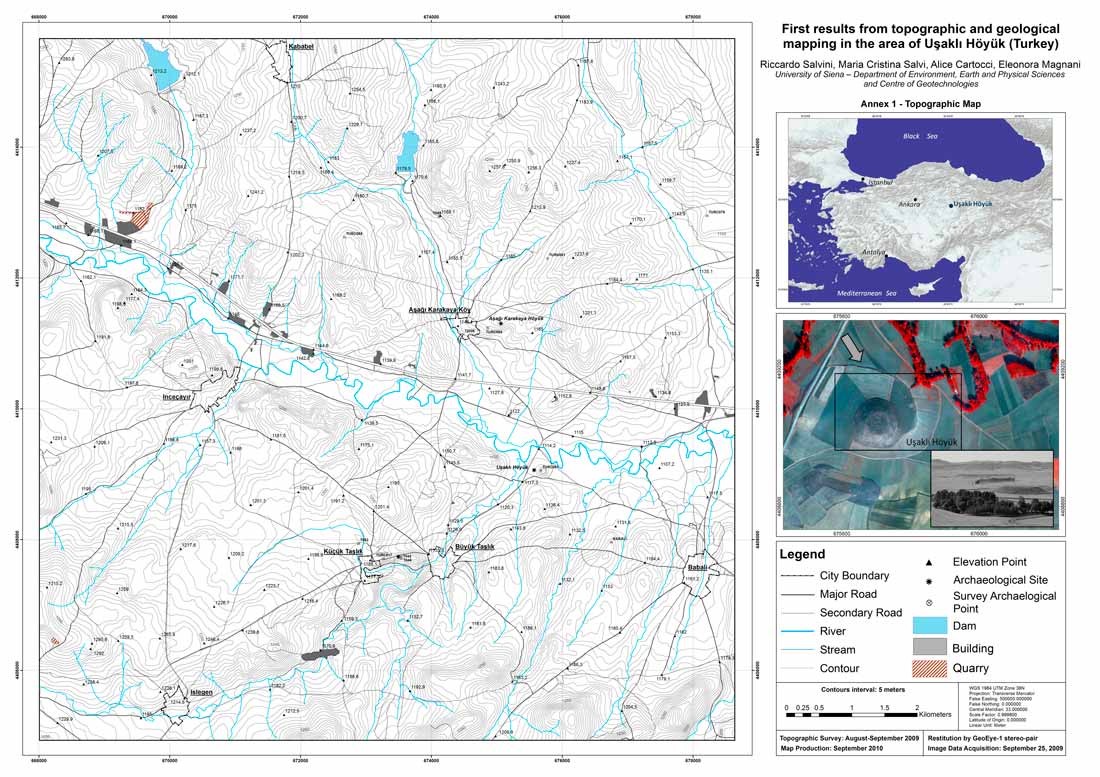 The geomorphologic study has concerned the geological survey of rock outcrops and morphological features; moreover, Ground Control Points (GCPs) have been measured and utilized for the creation of the new topographic map at a scale of 1: 10,000 and the preparation of the preliminary geological map. The GPS survey of about 200 GCP uniformly distributed in an area of about 90 square kilometres has been executed in Differential Real Time Kinematics (RTK) modality in respect to 10 reference stations properly built inside the permission area. Part of the GCPs have been utilized for the exterior orientation of a stereo pair of GeoEye-1 satellite imagery, while the remaining points are referred to geological stops on outcrops. The 10 reference bases have been measured in static modality for a minimum of 4 hours and later post-processed in respect of 2 trigonometric points, also measured through GPS survey, whose description cards were acquired at the Harita Genel Komutanlığı – Jeodezi Dairesi Başkanlığı of Ankara.

The geomorphologic study has concerned the landscape analysis and the geological survey of rock outcrops; more than 100 stops have been done and about 80 rock samples collected for petrographic and micro-paleontological analyses.

Granitic stones mainly outcrop in the southern part of the study area, the so-called “Kerkenes Granitoids” belonging to the Yozgat Batholith and referable to the Central Anatolian Crystalline Complex (CACC). The granitoids are overlaid by Eocene volcanic rocks (Alimpınar Member), by clastic and calcareous deposits of the Boğazkӧy Formation. To the North, the Neogene clastic sediments, mainly represented by sandstones, marls, conglomerates and breccias of the Iç Anadolu Group, are the youngest rocks of the region. Highest elevations are North-West of İşleğen (about 1300 m), while the lowest area is North-West of Babalı with an altitude a little higher than 1100 m.

The Uşaklı Höyük archaeological site is located within Eocene rocks next to quaternary fluvial deposits belonging to a small stream, tributary of the Eğri Öz Dere river West-North-West – East-South-East trending. All the geological outcrops have been photographed, described and their position coordinates recorded thanks to the GPS survey. Basing on the new topographic map and the GeoEye-1 satellite stereo pair exterior orientation, the Digital Elevation Model (DEM) of the area has been created which analyses have allowed us to collect important geomorphologic data on present and possible ancient landscapes and connecting paths.

Then, starting from the GeoEye-1 stereopair and the DEM, the orthoimagine of the area has been produced. It has revealed useful to extract, thanks to the application of automatic remote sensing techniques and photointerpretation, buried remains verified during the year 2010 fieldwork.

Fieldwork activities, only for an area of about 800 m2, have included rock spectral signatures collected by a FieldSpec3 Spectral Device on the southern side of the Uşaklı Höyük mound. Superficial spectral signatures have been compared with results achieved by the automatic extraction and by the stereo-interpretation of the satellite imagery in a way to recognize possible ancient buried remains. The position of the collected data on the tell has been chosen in accordance with results from contemporary geophysics inspections and past surveys. Around the tell area, the collection of stones spectral signatures has started with the aim of creating an archive of information to be compared with spectral signatures of rocks from surrounding areas source of ancient quarries.